MAHSOPA DINNER AND EVENTS PUBLISHED IN THE STAR METRO TODAY

The Star newspaper has published our MAHSOPA Dinner, Golf game and School Walkabout in the Star Metro today. Contact names and email addresses are listed so that interested former Malacca High pupils can book their interest in these events.

The MAHSOPA Dinner 2013 is being held at Hotel Equatorial, Melaka on Friday night, 29th. November 2013. The School Walkabout is on Saturday moring between 10.00 am to noon and the Golf game is on Sat. morning.

We hope more former pupils will join in our celebration dinner of Malacca High School 187th. Anniversary on 7th. December 2013.

To date, 30 tables has been paid and sponsored.

Table or seat bookings can be made through admin@mahsopa.net

With the forthcoming MAHSOPA DINNER 2013 being held in Melaka for the first time, former MHS pupils who want to attend this dinner on their own can travel to Melaka by car pooling.
Those who want to stay back and stay a night in Melaka for the school walkabout can share rooms.
Car pooling and sharing hotel rooms should be arranged individually for those who are interested to do.
Those in need of car pooling from Kuala Lumpur to Melaka or sharing hotel rooms in Malacca please contact Mr. Kong (017- 601 2322), our Car pooling and hotel room sharing co-ordinator.
Posted by TW Kang at 12:38 AM No comments:


In 2 weeks time, Malaysians of Hindu faith will celebrate the Deepavali festival of lights. May we take the opportunity of wishing our Hindu friends "Selamat Deepavali".

For ex-MHS pupils and families who want to stay at Hotel Equatorial, Melaka on Friday, 29th. November 2013, you can book your rooms by clicking onto the form below.

Latest payment date is 8th. November 2013 to confirm your booking.

Another way is to log into: www.agoda.com for your on-line booking. 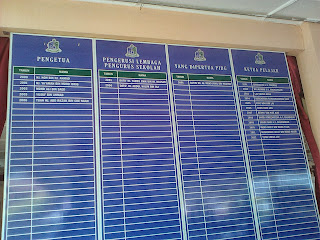 The school management has put on a new name board at the canteen recently. It is made from acrylic material.
Posted by TW Kang at 3:55 AM No comments:

MAHSOPA is glad to announce that MAHSOPA is able to organise a golf game amongst Mahsopa and alumni members on Saturday 30th November 2013 at the Ayer Keroh Golf & Country Club, Melaka.

For details, those interested, kindly contact Dr. Victor Pang through his email at c47ts@yahoo.com at least 2 weeks before 30th November 2013

Victor left MHS in 1964(F6) and MAHSOPA extends our appreciation to Dr. Victor Pang for his initiative in organising this Golf Game.

MAHSOPA is planning a Malacca High School Walkabout for former pupils and their families who are keen to visit their School on Saturday morning from 10.00am to 12 noon.

email us at admin@mahsopa.net with your name and the number of persons interested to have this walk down memory lane.

For us to organise and inform the School of visitors expected, all must email us your confirmation by 15th. November 2013. 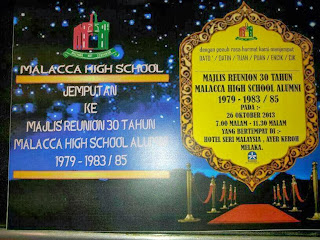 Last week, some members of the MAHSOPA 2013 Dinner committee viz. Robert Lim, Lim Koh Chin and Kang Tsz Wong travelled to Melaka and met up with the current Principal of Malacca High School, HSOBA President, Mr.Gomez and his secretary and fellow old pupils of Malacca High viz. Dr. Ee and Mr.Poonanrajah. We also met up with former pupils during the night as well.

Response to our coming MAHSOPA 2013 Dinner is encouraging. Some former pupils of various years had already pledge to take up tables for the event.

To date, we can safely say we have at least 20 tables booked. We are targetting at least 50 tables if former pupils of various years co-operate with us in this matter.

Call us or email us your booking at admin@mahsopa.net as soon as possible.

Some ideas such as a golf game to be held either on Friday morning or Saturday morning for those interested in a game of golf.

Back to School walkabout for Saturday morning has been suggested with the co-operation of the School authorities.

The principal has indicated his co-operation in allowing former pupils to park in MHS premises for the dinner.

MAHSOPA Committee is also planning some music entertainment and we suggested a MHS representative band performance for the night. Even an overseas Skype video link with former pupils residing overseas is being considered.

All these ideas and programmes are still being planned and once they are firmed up, we will inform you accordingly.

We look forward to your participation.